Today is T-14 days until my 40th birthday, and the Reconnection Project has empowered me more than I ever thought it would. Today, I start the process of moving beyond me… Let the games begin. Fandom is an action and a community. View fullsize The Last Air Bender from Shore Leave 32 When I say END_OF_DOCUMENT_TOKEN_TO_BE_REPLACED

This video retells The Star Wars Trilogy in 2 minutes using Legos and stop animation.  The video is great fan fun.  Watch the video above.

I love the scenes picked to highlight all of the events from the three movies.  There are many ships, settings, characters, and events featured.  One of my favorite is Yoda chilling in a recliner under an umbrella on Dagobah.  In context it’s hilarious.

The language used is very casual and without names which works since the voice narrating it is a child.  This lends to the fun relaxed nature of the video.  For instance the scene where Darth Vader reveals his identity to Luke is phrased as “That was when the Boy got very surprising news about his dad… Wud up son.”

I want that Lego collection, Wow! 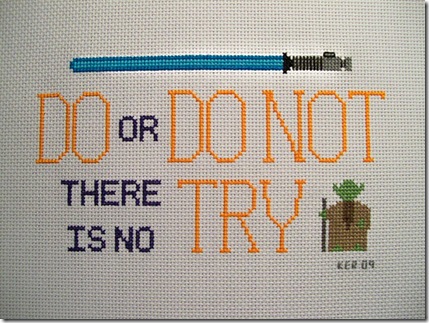 A Yoda-themed cross-stitch from flicker user Krupp.  This is great it’s like something I would hang in my kitchen for those bold cooking days.

A great weekend craft for all of the Star Wars fans out there… A Yoda finger puppet.  I love this project not only because it’s Star Wars and Yoda but also due to it’s simplicity.

All you need is:

The instructions consists of 4 easy steps.  Along with each step they also include pictures which I find really helpful.  Get the full instructions here! Inventor Spot has up a post on 10 Best Fun Star Wars Toys For True Fans.  I have seen most of them, and in fact many of them have been featured on dashPunk in the past.

I am not sure how I missed they Yoda backpack, but I want one. 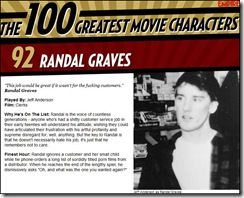 Why He’s On The List: Randal is the voice of countless generations – anyone who’s had a shitty customer service job in their early twenties will understand his attitude, wishing they could have articulated their frustration with his artful profanity and supreme disregard for, well, anything. But the key to Randal is that he doesn’t necessarily hate his job, it’s just that he remembers not to care (Empire).

It is great to see how many Speculative Fiction characters make the list, especially in the top 10.  It makes me wonder if we should make our own list. 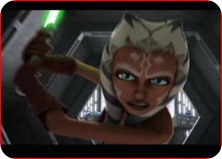 The Clone Wars series airs this Friday, October 3 at 9pm (e/p) on the Cartoon Network.  This 22 episode series is set during the years of the Clone Wars between Count Dooku and the Republic.  It Chronicles the adventures of Yoda, Obi-Wan, Anakin Skywalker and his Padiwan Ahsoka Tano.  The series picks up where the summer movie / pilot left off.
On Friday they will show 2 episodes Ambush & Rising Maleovelence.

9:00 p.m. Star Wars: The Clone Wars “AMBUSH”: Jedi Master Yoda is on a secret mission to forge a treaty with the King of the strategic system of Toydaria when his ship is ambushed by Count Dooku. Yoda and three clone troopers must face off against Count Dooku’s dreaded assassin Ventress and her massive droid army to prove the Jedi are strong enough to protect the king and his people from the forces of the war. 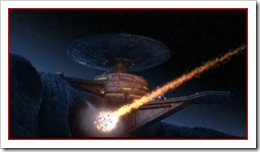 Read the Review of The Clone Wars movie here. 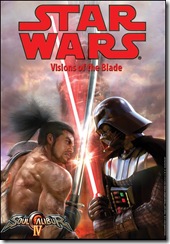 Star Wars.com just posted a free online comic about the Soul Calibur IV / Star Wars crossover called Star Wars: Visions of the Blade.
The comic is little more than an attempt to explain how Darth Vader and Yoda ended up in Soul Calibur IV.

It is hardly great literature, and the story is not that memorable, but the art style is interesting, and some of the panels are poster worthy.

If you are a Star Wars junkie, you may want to read it, if for no other reason than the seen with the exiled Yoda and Qui-gon on Dagoba, if that doesn’t interest you then skip it. 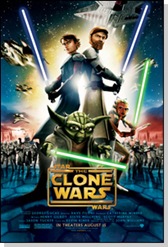 fandom that has made it into the mainstream.

Don’t This is a pilot for a TV show that got a theatrical release not Star Wars Episode 2.1 movie.  It is not a star wars movie George Lucas is done with Star Wars, there is only 3 about Anakin’s rise and fall, 3 about his redemption, and there is the possibility for 3 more about the Skywalker family but George has already told us that he isn’t going to do them.  For those who are upset over this it would be like watching Star Trek The Next Generation and getting mad that Kirk is not in it.

The Clone Wars is a piece of fandom that has made it into the mainstream.  Since this is a work of fandom it presumes that the audience has familiarity with the Star Wars setting and especially the Clone Wars animated series and so the pilot does not take time away from the story to tell the audience about things they should know.  This is great because the pilot has a great pace and does not sag to explain set up.

This pilot has a great pace, story, and action sequences.  They did a great job with the project.  It is a must see for Star Wars fans and a great film for those who like animated films.  I’m very excited about the series that is scheduled to start in January and can’t wait to see more.

The Plot / Story: The Clone Wars is set in the time frame between Star Wars Episode II: Attack of the Clones and Star Wars Episode III: Revenge of the Sith.  As the war rages on between Confederacy of Independent Systems and the Galactic Republic Jabba the Hutt’s son is taken by a group of renegades.  Anakin Skywalker and Obi-Wan Kenobi depart in search of answers: where is the Hutt’s son, and who is controlling this mysterious renegade group? Yoda also sends Ahsoka Tano along as Anakin’s apprentice.

Get your copy of Star Wars: The Clone Wars

Don’t wait. Guarantee your seat before you go and  avoid a sold out show. Skip the box office lines and buy movie tickets at Fandango.com.

Thanks to Xeni Jardin over at Boing Boing for sharing this photo that was taken at WonderCon 2008. I love Yoda and wished I could have seen this in person. 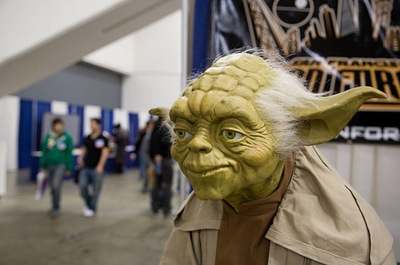